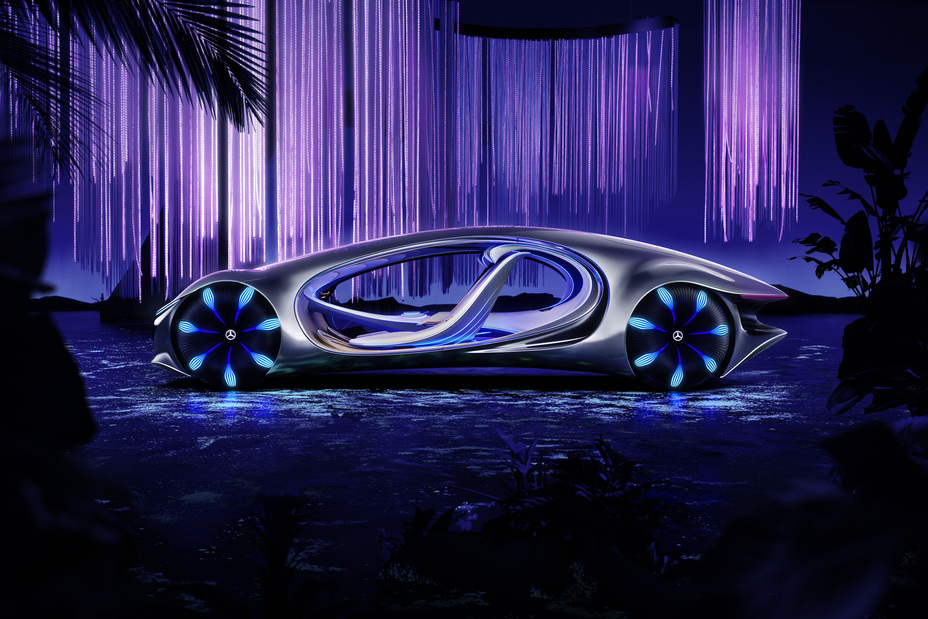 About a year ago we talked about the Mercedes Benz AVTR concept car. To refresh your memory, this concept car has the general shape of a futuristic bar of soap with a light-up badge and illuminated spokes in the wheels. The AVTR is inspired by James Cameron’s 2009 science fiction movie Avatar and is designed to be a zero impact car by being carbon neutral and electric. About a year later after the introduction of this concept car, we have some updates!

The navigation idea behind the updated AVTR concept is that all you will need to do as a passenger is think about where you want to go and the vehicle will take you there autonomously. This kind of technology is called brain-computer interface (BCI). It is essentially a computer-based system that acquires brain signals, analyzes them, and translates them into commands that are relayed to an output device to carry out a desired action. This idea and technology are similar to the neuronal connection between the Na’vi and nature in Cameron’s Avatar.

Want to try it out? All you have to do is go to the Munich show. There you will have the opportunity to try out the BCI by climbing into a mockup of the AVTR’s driver’s seat. Once you are in there light dots will be projected onto a digital dashboard while a wrap-around band with wearable electrodes monitor and record your brain activity. After one minute you will be linked to the vehicle and the BCI system will measure your neuronal activity as visual stimuli are displayed on the digital dashboard. The system will then detect what you are focused on, using that to trigger different vehicle functions. You could essentially tell it which parking stall you want, which lights you want turned on, and even input information like your destination. A very exciting concept that has never been seen before.

If this futuristic car comes to life it will change the automotive industry forever. For more information on the Mercedes-Benz AVTR stay updated here on our monthly blog.